COVID UPDATE 6 October 2021: We are adapting our program in line with NSW Government Health advice and restrictions. Our program below will be updated accordingly.

Currently some of our events are going ahead. Others have been rescheduled or are now online.

PLEASE REGISTER for face-to-face event on 13 November. This will assist us with complying with restrictions on audience numbers. Registration details will be available approximately two weeks before the event. Payment for this event will be at the door (cash or contactless). If you register but then cannot attend please contact us so that we can give the place to someone else.

Join this presentation directly via our YouTube Channel: https://www.youtube.com/channel/UC4Ol4MYrWDxIBygnV-zdmAg 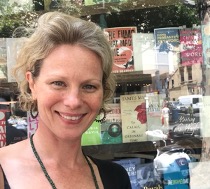 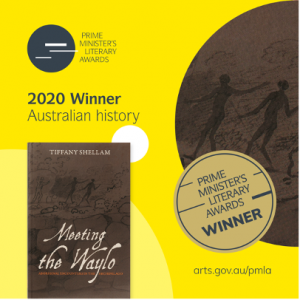 Indigenous intermediaries and the art of encounter

The Australian hydrographic expedition captained by Phillip Parker King (1818-22) produced a vast archive of journals, reports, log books, letters, maps, sketches and material collections. Within this collection, and at times well hidden, are narratives, traces, fragments and images of the Indigenous men who travelled with the expedition to the north-west and northern coasts of Australia. Boongaree, a Kuringgai man, travelled with King on board HMC Mermaid in 1818. In 1821, Bundle, a Dharawal man replaced Boongaree for the fourth and final voyage on the replacement vessel, HMS Bathurst, and Migeo, a Whadjuk Nyungar man travelled on board HMS Beagle in 1838. This talk reveals the ways in which the art, letters, journals and log books that the crew generated, offer a glimpse into the experience of these men as they voyaged on board this maritime expedition, and my methodology for reading them.

Tiffany Shellam is Associate Professor in History at Deakin University. She works collaboratively with Noongar people, and historians, museum curators, librarians and archivists to critique the archives, unearthing hidden and alternative histories generated by encounters between Indigenous people and explorers and settlers in the 19th century. Her book Shaking Hands on the Fringe: Negotiating the Aboriginal world at King George’s Sound was published by UWA Publishing in 2009. Meeting the Waylo: Aboriginal encounters in the Archipelago (UWA Publishing 2019) won the Prime Minister’s Literary Award in Australian History in 2020. 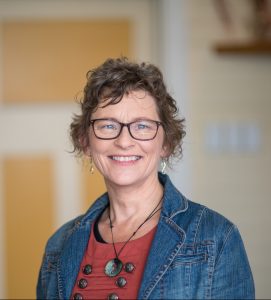 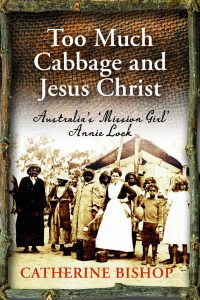 Join Dr Catherine Bishop to celebrate the publication of her latest book Too Much Cabbage and Jesus Christ: Australia’s ‘Mission Girl’ Annie Lock, a tale of massacres, stolen generations, intrepid desert treks and scandalous headlines, with the central character one of our history’s appealingly eccentric yet deeply problematic women.

Catherine is the author of the award-winning Minding Her Own Business: Colonial Businesswomen in Sydney (2015), Women Mean Business: Colonial Businesswomen in New Zealand (2019), and co-editor of Female Entrepreneurs in the Long Nineteenth Century: A Global Perspective (2020). She currently holds an Australian Research Council funded postdoctoral fellowship at Macquarie University researching a history of Australian businesswomen since 1880 and is writing two books: ‘Blackmail, Bigamy & Bonking: The Lives and Loves of Two Victorian Businesswomen’ (the scandalous pre-history of the Hydro Majestic), and ‘The World We Want: Creating Global Citizens in Cold War Youth Forums’. She is also currently chair of the Blackheath History Forum. 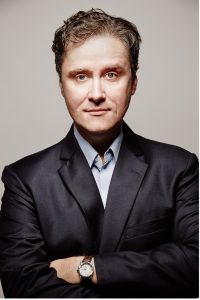 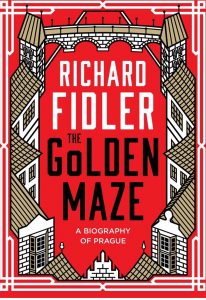 Prague: the Threshold and the Grave of the Warrior

Richard Fidler, ABC broadcaster and author of The Golden Maze, dives into the history of Prague, perhaps the world’s most enigmatic and beautiful city: a jumble of gothic towers, baroque palaces and zig-zag lanes that has survived plagues, purges and pogroms. The city has lingered in Richard’s memory and imagination since he was caught up in Prague’s dramatic Velvet Revolution of 1989. He returned in 2019 to write the history of a place that has served as both a threshold and a crossroads for a thousand years.

Richard Fidler is the author of Ghost Empire and the co-author of Saga Land, a journey into the sagas of Iceland. Richard is best known as a presenter of Conversations on ABC Radio, which attracts a large listening audience around the nation, and is the most popular podcast in Australia. His new book, The Golden Maze, is a biography of Prague.

2021 PAST EVENTS – available to revisit on our youtube channel 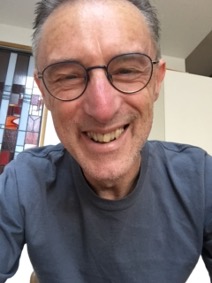 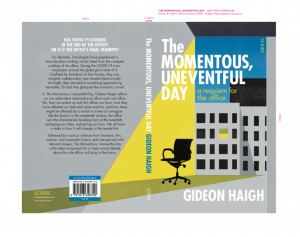 The Momentous, Uneventful Day: A Requiem for the Office

The office building was the characteristic architectural form of the twentieth century, like the farm and the factory before it.  Will it endure into the twenty-first?  Gideon Haigh, author of The Office: A Hardworking History and The Momentous, Uneventful Day: A Requiem for the Office, takes a look at the evolution of office work and office life, and what we learned about it under the shadow of COVID in 2020.

Gideon Haigh is the author of 43 books, the latest of which is The Brilliant Boy: Doc Evatt and the Great Australian Dissent.  He writes about cricket for The Australian and The Times.  His website is gideonhaigh.com. 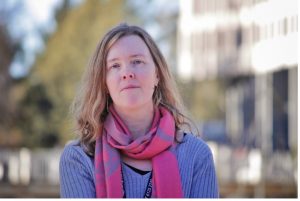 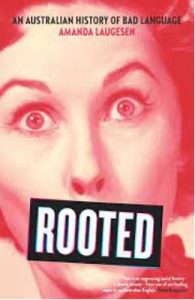 Australians are popularly associated with the idea that they are more relaxed about language than many other English-speaking populations. We are fond of colloquialisms, we like to abbreviate words, and we like to swear. All of this is taken to reflect some of the innate qualities believed by many to mark ‘Australianness’, such as our ‘she’ll be right’ attitude and our lack of respect for authority. In this talk, I will explore the way attitudes towards swearing have historically intertwined with shifting ideas about Australianness, and how this has served to shape gendered, racialised, and class-based understandings of Australian identity. Swearing has played a role in the way we think about ourselves, but it has also been used to marginalise and exclude, shaping our identity in ways that can be seen as problematic as much as liberating. 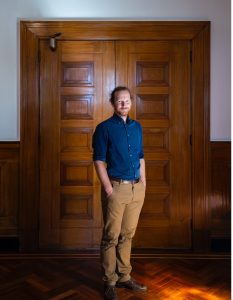 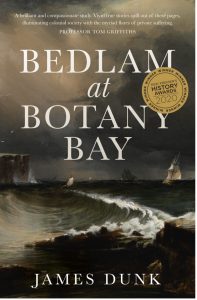 The Incoherent and Accidental: Writing the History of Madness

The history of mental illness often comes embedded within the history of psychiatry or psychiatric institutions – madhouses, lunatic asylums, mental hospitals. We come at it historically through the theories, therapies, and casefiles of those who have worked, in medicine and law, to diagnose, separate, and treat the ill. Or perhaps we look for what madness has meant in the words of poets and prophets.

In this talk I describe how I looked for, and found, madness in colonial New South Wales. I use the life of gentleman convict John Grant to trace the course of madness in a penal colony – show how internal chaos spilled through the structures of convict transportation and discipline, and as they did they reveal the colony in a new light.

James Dunk lives and writes on Wangal country in Sydney’s inner west. He works as a historian at the University of Sydney, where he lectures in the history of medicine and Australian history. His first book, Bedlam at Botany Bay won the Australian History Prize at the 2020 New South Wales Premier’s History Awards and was also shortlisted for the University of Queensland Non-Fiction Book Award, Ernest Scott Prize and the Kay Daniels Award. His research has been published in the New England Journal of Medicine, Rethinking History, History Australia, and Health and History and his literary reviews and essays have appeared in Griffith Review and Australian Book Review. 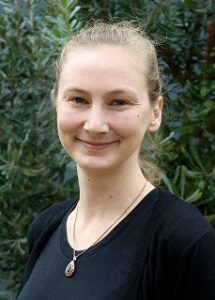 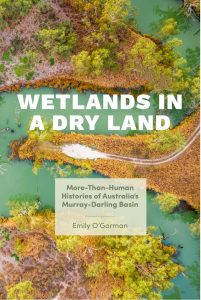 In the name of agriculture, urban growth, and disease control, humans have drained, filled, or otherwise destroyed nearly 87 percent of the world’s wetlands over the past three centuries. Unintended consequences include biodiversity loss, poor water quality, and the erosion of cultural sites, and only in the past few decades have wetlands been widely recognised as worth preserving. Within this context, it is important to ask: What has counted as a wetland, for whom, and with what consequences?

Using the Murray-Darling Basin—a massive river system in eastern Australia that includes over 30,000 wetland areas—as a case study and drawing on archival research and original interviews, my new book Wetlands in a Dry Land: More-than-Human Histories of Australia’s Murray-Darling Basin examines how people, animals, and plants have shaped wetlands from the late nineteenth century to today. This talk draws on this rich research to argue that we need to understand wetlands as socioecological landscapes in order to create new kinds of relationships with and futures for these places.

Emily O’Gorman is an environmental historian and Senior Lecturer at Macquarie University. Her research is primarily concerned with contested knowledges within broader cultural framings of authority, expertise, and landscapes. This has been supported by nationally competitive research grants as well as a Fellowship at the Rachel Carson Center, LMU, Munich in 2014-15. She is the author of Flood Country: An Environmental History of the Murray-Darling Basin (2012) and Wetlands in a Dry Land: More-than-human Histories of Australia’s Murray-Darling Basin (2021), and co-editor of Climate, Science, and Colonization (2014) and Eco-Cultural Networks and the British Empire (2015). She co-leads the Environmental Humanities research group at Macquarie University, was a founding Associate Editor of the journal Environmental Humanities (2012-2014) and a founding co-editor of the Living Lexicon in that journal (2014-2020). 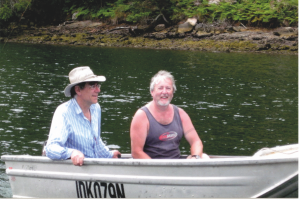 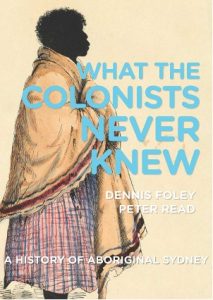 A history of Aboriginal Sydney since 1788

Dennis Foley is an elder of the Gai-mariagal people of northern coastal Sydney. Dennis grew up in the 1950s and 1960s where he received the most intense traditional education that it was possible to still have in Sydney at this time.  In our book he shares these memories, and those of his family, up to his present-day work in reconciliation. The historian Peter Read grew up in the same Country as Dennis. Possibly we saw each other at Fullers Bridge, Collaroy or the Spit in the 1950s. Very probably our relatives, sitting on the sand, noticed each other at Long Reef, and, no doubt, kept their distance. Drawing on hundreds of interviews he conducted for the website historyofaboriginalsydney.edu.au, Peter sets the experiences of Dennis alongside stories and memories of Darug and Gundangara Country.

There was so much the colonists didn’t know.  And still don’t.

Dennis Foley identifies as Koori. His matrilineal connection is Gai-mariagal of northern Sydney, and his patrilineal connection is to the Wiradjuri people of the Turon River region. Now Professor of Management Studies at the University of Canberra, his career within the tertiary education sector began researching an Indigenous Career and Employment strategy at Griffith University followed by the establishment of the first Australian Indigenous Degree program in Contemporary Australian Indigenous Art. Several teaching appointments followed including at the Universities of Queensland, Sydney, Newcastle and Hawaii. Prior to joining the tertiary education sector, Dennis held middle to senior management positions within the banking and finance sector. He is a Fulbright Scholar, and a dual Endeavour Fellow. His publications focus on social inclusion and cross disciples such as Indigenous Literature, Indigenous History, Indigenous Studies, Business Management (Entrepreneurship) and Indigenous Epistemology and Pedagogy.

Peter Read is an Adjunct Professor in the Department of History, at the Australian National University. He has researched Aboriginal History for many years, and is the author of such books as Charles Perkins A Biography and The Stolen Generations. He is a Director of Link-Up (NSW) Aboriginal Corporation, based at Ropes Crossing

Keep updated with the latest news by completing the form below to receive our newsletter.