Last year we had the pleasure of hosting Dr Elizabeth Tynan’s talk: ‘When Atomic Thunder Rolled across Australia’, for the 2017 Blackheath History Forum program. Here she reflects on her research on the secret history of Maralinga.

Maralinga is Australian secret history, only relatively recently opened up to scrutiny.  Secrecy is at the heart of the tale; indeed, secrecy made it possible. While some Australians may have been vaguely aware that atomic weapons were tested in the Australian wilderness, few people would realise how extensive and damaging the test program was.  Many people confuse Maralinga with Woomera, where the British tested their rocket technology, and they may even conflate both of these sites with Pine Gap, the US signals facility that also hides itself in the Australian desert, away from too much scrutiny.  Our expansive territory has long been attractive to our great and powerful friends looking to stage covert operations.

The mystique of the atomic weapons test range that came to be called Maralinga still lingers, decades after the atomic thunder stopped rolling across the South Australian test site.  The word “Maralinga”, appropriated from a now-extinct Northern Territory Indigenous language, means thunder, and what an apt name it proved to be.  The echoes of the thunderous explosions from both the major and minor trials at the site still reverberate.  The story has been uncovered incrementally, beginning with whistleblowers, politicians and journalists in the late 1970s who aired the first public inklings of what remained at the then-deserted site.  A Royal Commission in the mid-1980s brought a large part of the story to light, although there was still more investigation needed to show the extent of deceit by the British test authorities.  That important work took place as recently as the early 1990s, and showed clearly that the British knew the site was seriously contaminated but did not share that knowledge with the Australian government.

Maralinga is a complex story that had its roots in the pre-World War II outpouring of scientific knowledge about atomic fission. First the scientists, then the military and the politicians, became aware that fundamental physical properties could be harnessed to create weapons never seen before.  In August 1945, the world was shaken by atomic thunder for the first time.  The bombs dropped on Hiroshima and Nagasaki in Japan heralded a new and dangerous era as the nuclear age dawned.  The relentless progress of the technology, turbocharged by the war, made necessary the acquisition of large swathes of territory to test these thoroughly contaminating new weapons.  The American pushed their weapons development allies, the UK, to the outer in the post-war era, so the British found themselves on their own and in need of their own testing grounds.  Their eyes turned to Australia.

In 1947, the United Kingdom made a political decision to pursue an independent nuclear deterrent. In doing so, that nation committed to attempt to catch up to the first two nuclear-armed nations, the United States and the Soviet Union, both of whom were streets ahead by the time the first British atomic bomb was tested in 1952.  British ambition to join the nuclear club was so great that they trampled over pristine Australian territory to achieve it.  The tests were strictly controlled by the British, and the fact that the test authorities were granted so much unchecked autonomy is scandalous in itself.  Unforgivably, Australia willingly let a foreign nation undertake life-endangering activities on its territory without insisting upon proper monitoring or safety measures.  The consequences in terms of radiation exposure and plutonium contamination were severe, particularly for service personnel and Indigenous people.

The Cold War set the tone for this story – paranoia, distrust of enemy and ally alike, the rush for supremacy in technology, geopolitical game-playing and scientific hubris.  Australia became an intrinsic part of this mad dash to create atomic weaponry, although most of the population had no idea what the government had agreed to and as a nation we had no past or future stake in nuclear technology.  We were a non-nuclear nation at the heart of the nuclear arms race.

The test program ran from 1952 to 1963, and took place at three locations:  the Monte Bello Islands off the Western Australian coast, and Emu Field and Maralinga in the South Australian desert.  A total of 12 ‘mushroom cloud’ atomic devices were exploded in Australia: three at Monte Bello, two at Emu Field and seven at Maralinga.  The ‘major trials’, as the mushroom cloud tests were called, investigated various atomic weapon designs and explosive yields. Then there were the ‘minor trials’, and particularly Vixen B, which ran from 1960 to 1963.  These especially secret tests left a staggering amount of highly toxic plutonium at the site, untreated, until a clean-up was carried out in the late 1990s.  That clean-up was itself flawed and controversial.

Australia was in a difficult and uncomfortable position, not a nuclear power itself but providing the setting for top secret bomb tests conducted by the world’s third nuclear power.  This was complicated by the fact that the UK was the “mother country” and as a result the Australian government at the time seemed ill-equipped to negotiate effectively to protect its territory and to share in the data obtained from the tests.  Britain never saw Australia as an equal partner in the atomic tests and did not honour its vague undertakings to share the knowledge gained from the tests with the Australian Government.  In fact, Australia got almost nothing out of the tests, except for extensive plutonium contamination of a portion of outback territory and a large political headache.

The Maralinga saga, apart from being a fascinating historical story, reminds us that governments must always be watched, lest they exceed the power granted to them.  Blindly trusting governments to operate in the best interests of the nation is inherently risky.  Instead, we need to ensure robust systems of transparency and accountability, as well as a vibrant investigative journalism culture and, in my opinion, a high level of scientific/technological literacy among journalists.  One of the features of the Maralinga saga was the lack of understanding of radiation and nuclear weapons science that made concealment of what was really going on so much easier.  There is no reason to think that the same dangers exemplified by Maralinga are not still lurking. 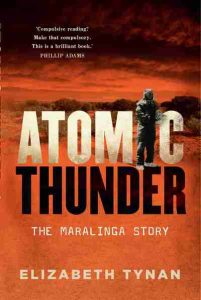